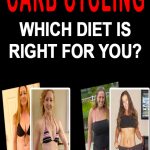 You tried the whole low-carb weight-loss strategy and — let us guess — it sucked. You felt exhausted, your workout performances suffered, and you dreamed of nothing but bread and pasta and pancakes.

When baked goods start to take over your daydreams, a carb cycling meal plan might sound like an attractive weight loss strategy. But what does that mean — and does it work? Here’s the lowdown on the carb cycling diet.

What is Carb Cycling?

Carb cycling is a dietary approach in which you alter your carb intake on a daily, weekly, or monthly basis, depending on your goals.

One common variation consists of eating more carbs on days you work out, and fewer carbs on rest days. “It’s an easy diet because it allows you to have the carbs you like with little to no deprivation,” says Wisconsin-based strength coach Pat Gilles, C.S.C.S. “It ensures you get enough protein and carbs to maintain the muscles you have, but it allows you to lean up at the same time.”

So what exactly is a “low carb diet”? While there’s no standard definition, a low-carb diet is generally defined as any diet in which less than 45 percent of your daily calories come from carbohydrates. Carbohydrates contain 4 calories per gram, so for someone following a 1,600-calorie diet, that would equate to anything less than 180 grams of carbs per day.

But don’t go carb crazy just yet: There’s a lot more you need to know about the carb cycling plan before you decide if it’s right for you.

A ketogenic diet is a dietary approach that focuses on minimal carbohydrates, moderate amounts of protein and high healthy fat consumption — the three keys to achieving nutritional ketosis. In fact, it’s what I recommend for most people who would like to optimize their health.

There are many reasons why you should try a ketogenic diet. It can be very beneficial for people suffering from chronic conditions, or for people who would simply like to be healthier than their current state. You’ll be excited to know that a ketogenic diet can help with the following:

If you’re trying to lose weight, then a ketogenic diet is one of the best ways to do it, because it helps access your body fat so that it can be shed. Obese people in particular can benefit from this method.

In one study, obese test subjects were given a low-carb ketogenic diet and a low-fat diet. After 24 weeks, researchers noted that the low-carb group lost more weight (9.4 kilograms) compared to the low-fat group (4.8 kilograms).

Even my own body was able to feel the benefits of following a ketogenic diet. I was able to drop my weight from 225 to 190 pounds, despite eating 2,500 to 3,000 calories per day. Since then, I have increased my consumption to 3,500 to 4,000 calories just to maintain my ideal weight.

The human body can use sugar and fat as fuel sources. However, the latter is preferred because it is a cleaner, healthier fuel, as it releases far fewer reactive oxygen species (ROS) and secondary free radicals.

By eliminating sugar from your daily food consumption, you’re decreasing your risk of developing chronic inflammation throughout your body.

Inflammation is the #1 reason many of us are unable to get rid of stubborn body fat. The simple formula is as follows:

And the only way to reverse the belly fat gaining process, is to reduce your inflammation.

You can do that quickly with a keto diet.

You may be wondering how to carb cycle — but first, it’s important to understand why you need carbs in the first place and how a carb cycling diet works.

1. Carbs are your body’s quick-acting fuel.

Apart from powering your brain and red blood cells, carbohydrates are responsible for giving your muscles what they need to crush your toughest workouts, explains Susan Kleiner, Ph.D., R.D., author of Power Eating and a sports nutrition consultant to NFL, NBA, and Olympic athletes.

According to a report in Nutrition Today, carbs are “the substrate most efficiently metabolized by the body and the only macronutrient that can be broken down rapidly enough to provide energy during periods of high-intensity exercise when fast-twitch muscle fibers are primarily relied upon.”

2. Carb cycling may play a role in “fat adaptation.”

When your body’s carb load is depleted, your body burns fat for energy. (That’s the idea behind the high-fat, low-carb keto diet.) Over time, forcing your body to burn fat may theoretically increase your natural tendency to use fat as an energy substrate. Researchers call this becoming “fat adapted.”

A 2016 study of endurance athletes suggests adaptation may occur after following a ketogenic diet for an average of 20 months. However, proponents of the carb cycling meal plan believe you can also become “fat adapted” through periodic low-carb days.

“Some protocols are easy, such as three days of low carbs followed by three days of high carbs,” says Gilles. “Other protocols can get more complex, with four low days, one high day, then two low days followed by a no-carb day, high day, two low days, two moderate days, and one high-carb day.” (Uh, did anyone follow that?) In other words, not all carb cycling diets are easy to follow.

4. Carb cycling macros may vary, too.

What qualifies as a “high-carb day” or a “low-carb day”? That depends on which carb cycling protocol you follow.

The Dietary Guidelines for Americans 2015-2020 recommend getting between 45 and 65 percent of your daily calories from carbs. On some carb cycling plans, anything below that could be considered a low-carb day. But stricter protocols may go as low as 10 grams or less on low-carb days. (FYI, an apple contains 15 grams of carbs.) If you want to try carb cycling, it’s important to find a protocol that’s sustainable for you.

What Do You Eat when Carb Cycling?

Your carb cycling diet menu should include:

It might. In a 2011 study, women who cut carbs twice a week lost an average of nine pounds over the course of four months, while women on a Mediterranean diet lost five pounds. (Both groups were on calorie-restricted diets.)

Kleiner largely attributes that weight loss to sustainability. Research suggests the ability to stick to a diet is the number one predictor of weight-loss results. Because carb cycling leaves some wiggle room for, well, carbs, it may be easier to sustain than a more restrictive plan. (Especially since carbs are in so many foods you love — possibly even your morning latte.)

That said, carb cycling is intended to be a short-term strategy for weight loss over several weeks — or, at most, a couple of months. “You cannot eat this way forever,” Gilles says. “Your body needs carbs to function properly. People who carb cycle do it only until they achieve their goal.”

Even over the short term, an extreme carb-cycling approach that yo-yos between low-carb and high-carb days can put you at risk of nasty consequences, says Lori Zanini, R.D., C.D.E., a spokesperson for the Academy of Nutrition and Dietetics.

“Our brain requires a minimum of 130 grams of carbohydrates per day, and if you’re physically active, your needs increase even more, which is important to consider for overall health,” Zanini says. Over time, manipulating your body’s fuel sources may have a detrimental effect on metabolism, she adds. And unless you’re getting regular blood tests, there’s no surefire way of knowing when you’ve hit that line — until you’ve already crossed it and start to see your results and possibly your health suffer.

Are Low Carb Days The Same As Keto?

The ketogenic diet is a specific type of low-carb diet which typically restricts carb intake to 20 to 50 grams per day — every day. The goal is to trigger ketosis, a process in which your body burns fat for energy instead of carbs. It typically takes 3 to 4 days of carb restriction for this to happen. Someone on the keto diet may maintain this eating plan for weeks or months at a time — though, needless to say, this can be hard to sustain over the long term.

How to Carb Cycle the Right Way

If you decide carb cycling is a plan that’s right for you — at least for a little while — there are a few things to keep in mind.

Start by knowing when to go low and when to go high. “Match your food intake to your activities,” Gilles says. “Eat more carbs on days that you exercise or exercise hard, but you don’t need to go to extremes.”

The recommended minimum amount of carbs per day is 130 grams. That’ll cover your body’s basic fuel needs, but you’ll need roughly 60 additional grams of carbs per hour of intense exercise each day, says Donald K. Layman, Ph.D., professor emeritus of food science and human nutrition at the University of Illinois.

If you sandwich your exercise between those extra carbs, all the better. For optimal performance, you need to hit your workouts with plenty of high-quality carbs on board. But research also suggests that post-workout carbs along with protein can help the body recover and build muscle so you get more out of every single sweat session.

In the end, just remember that carbs are fuel. Treat them that way, and you’re on the right track to losing weight.

So, now that you understand the main differences between keto and carb cycling, which one should you do?

And lucky for you I have created programs for both of these diets.