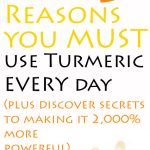 Every day people just like you are using India’s “golden spice” to get a body that looks, feels, and functions better than it has in years. Even today, scientists continue to uncover powerful ways this simple kitchen spice can help you:

Yet, this list barely scratches the surface of what turmeric can do to protect and heal the body. Of course, you might wonder how a tropical plant as common as turmeric can support your health so powerfully.

We did too. So we began digging…

Turns out, the amazing healing effects are derived primarily from its most active and abundant compound, curcumin. And scientists say they now know why curcumin is such a powerful healing compound.

Once metabolized in the body, curcumin inserts itself into your cell’s membrane. There it does a little house-cleaning and reorganizing. This may not seem like a big deal…

But once a cell becomes organized again, it’s able to process information more easily…fight off harmful intruders more readily…and quickly remove dangerous toxins. In fact, your body simply works better—like it did 5, 10, maybe even 15 years ago!

Which means…you could get a younger brain, heart, eyes, gut, joints, and lungs just by adding turmeric to your daily diet.

Truth is, once we pored through the mounds of scientific evidence and finished our research on turmeric, we realized that this is how medicine is supposed to work…and that curcumin may very well be…

One of THE Most Powerful Natural Healing Substances Ever Discovered

Of course, this shouldn’t come as a surprise. Going back more than 4,000 years, turmeric has been a treatment of choice in traditional Chinese, Indian, and Ayurveda medicine.1

In China, turmeric was mixed with cinnamon twig and astragalus to effectively treat upper back and shoulder pain.

Ayurvedics inhaled the fumes from burning turmeric to alleviate congestion, used turmeric juice to heal wounds and bruises, and applied a turmeric paste to relieve all sorts of skin conditions.

In India, turmeric has been used traditionally to disinfect surfaces and treat laryngitis, bronchitis, and elevated blood sugar.

But you’re probably wondering the same thing I was. These aren’t exactly the world’s deadliest diseases, so how might turmeric stack up against something bigger, something more debilitating, like…Alzheimer’s!

Interestingly, population studies seem to indicate elderly villagers in India suffer less Alzheimer’s disease compared to their peers in other parts of the world.

See, Alzheimer’s begins as an inflammatory process in the nerve cells of the brain. And Indians eat turmeric with almost every meal…leading researchers to conclude that curcumin’s anti-inflammatory properties are partly responsible for the lower rates of Alzheimer’s.

That’s great news, wouldn’t you agree? Especially if you or someone you know suffers from the overwhelming pain and debilitation that accompanies Alzheimer’s disease.

And doctors everywhere are now wondering how turmeric compares to some of today’s most popular medications in treating diseases.

Well, for one, turmeric is one of the most studied natural substances ever, going back to 1949. In fact, the amazing health properties of turmeric and its healing compound curcumin are so extensive—there have been 9,487 peer-reviewed articles published in the U.S. National Library of Medicine at the National Institutes of Health!

Which makes turmeric one of the most frequently mentioned medicinal herbs in all of science!
Considering it’s one of the most effective nutritional supplements of our time, people everywhere are scrambling to learn about its amazing health benefits. Which explains why turmeric recently topped the list of rising stars in Google’s 2016 Food Trends report!

Because of the sheer number of health conditions turmeric is known to treat, many of today’s most renowned doctors now agree…

In fact, there seems to be no end to the incredible healing power of turmeric and its star compound curcumin. Scientists are finding an astonishing array of antioxidant, anticancer, antiviral, anti-inflammatory, antibiotic, antifungal, and antibacterial properties.

So I’m not exaggerating when I say, compared to conventional medicine…

Turmeric performs as well or better than many of today’s most popular prescription medications! And, WITHOUT the added risk of well-known and dangerous side effects.

Let’s take a quick look at five of the most compelling examples where pharmaceutical drugs pale in comparison to turmeric’s ability to protect and heal your body:

Despite significant advances in cancer treatment modalities over the last decade, neither the incidence of the disease nor its mortality has changed in the last thirty years. Available anti-cancer drugs exhibit limited effectiveness…produce severe side effects…and are extremely expensive.

However, curcumin in turmeric has been extensively studied and written about over the last three to four decades for its potential anti-cancer effects. In 2015, a team of international researchers conducted a thorough review of this existing scientific literature showing the efficacy of curcumin against various cancers.

“Curcumin has been found to suppress initiation, progression, and metastasis of a variety of tumors.”

In an article exploring whether turmeric can prevent or treat cancer, experts at Cancer Research UK wrote…

“A number of laboratory studies on cancer cells have shown that curcumin does have anticancer effects. It seems to be able to kill cancer cells and prevent more from growing. It has the best effects on breast cancer, bowel cancer, stomach cancer and skin cancer cells.

Rheumatoid arthritis is a progressive disease and much more devastating than previously understood.

Conventional treatment includes using dangerous drugs like prednisone (a steroid), methotrexate (a cancer drug), and diclofenac sodium (an NSAID). Sadly, these types of drugs are associated with close to 100 serious side effects, including damage to your heart, gut, kidneys, liver, hearing, pregnancy, and more!

But if you could get relief from RA without suffering these side effects…wouldn’t you want to know about it? Now you can.

In the first study of its kind, researchers from India set out to compare the benefits of curcumin in turmeric to arthritis drugs. They divided 45 volunteers with rheumatoid arthritis into three groups. One group got curcumin…another diclofenac sodium…and the third, a combination of the two.

The results were extraordinary!

The curcumin group experienced significantly greater reduction in pain, inflammation, and number of swollen and tender joints than the patients in the diclofenac only group. More importantly, curcumin did not relate with any adverse events and was found to be completely safe.

This study provided the first evidence highlighting the safety and superiority of curcumin treatments in patients with rheumatoid arthritis.

Scientists have now pegged inflammation as a primary risk factor for almost every disease known to man. If you can reduce inflammation, chances are you’ll experience less disease.

So in 2004, scientists at the Cytokine Research Laboratory in Houston, Texas compared a dozen compounds in their ability to reduce inflammation.

Published in the journal Oncogene, researchers discovered that curcumin was among the most effective anti-inflammatory compounds in the world. In fact, it performed better than the powerful and most commonly prescribed steroid dexamethasone, as well as seven popular NSAIDs—including both aspirin and ibuprofen!

Which means, turmeric may be the key to reversing disease…by reducing inflammation in the body.

While dozens of previous studies on laboratory animals provide substantial proof that turmeric is effective in reducing symptoms of depression, none have ever been done on humans. Until now…

In 2014, scientists from India published the results of an innovative study in the journal Phytotherapy Research. The team of researchers split 60 volunteers diagnosed with a major depressive disorder (MDD) into three groups. One group took curcumin, one took the anti-depressant fluoxetine (Prozac), and a third used a combination of the two.

Turns out, curcumin was found to be just as effective as Prozac in managing depression. But more importantly, all patients in the first group tolerated curcumin extremely well. Yet Prozac—along with other depression medications—can cause serious side effects. Brand new symptoms like anxiety, tremors, irregular heartbeats, diarrhea, memory problems, severe skin reactions, insomnia, headaches, weight gain…the list goes on and on!

Which makes using curcumin for alleviating depression a much healthier and safer choice.

If you’ve got diabetes, you’re probably taking a daily dose of Metformin to help control your blood sugar.

Ufortunately, the list of side effects you face is long and painful. From gastrointestinal distress…to difficulty breathing…to severe muscle and head pain—even coma!

If there was a natural, risk-free remedy for managing your type-2 diabetes, would you be interested?

A 2009 study published in the journal Biochemistry and Biophysical Research Communications explored how supplementing with turmeric offered a lower-risk, more effective solution for managing diabetes.

When Auburn University researchers compared turmeric to the popular diabetes drug Metformin, they found that curcumin in turmeric is literally 400 times more potent than Metformin in activating AMPK—an enzyme that plays a crucial role in glucose transport and increases insulin sensitivity, which can help reverse type 2 diabetes.

Not only that, another study found that curcumin supplementation protected against two common and debilitating complications of diabetes—diabetic neuropathy and retinopathy.

For lowering blood sugar, reversing insulin resistance, and protecting against complications of diabetes, turmeric has become the natural treatment of choice.

Truth is, there isn’t a week goes by where some new research confirms how turmeric can perform as well or better than every single one of these conventional medications listed above.

In fact, after months of research and realizing the incredible capacity for any one of us to look, feel, and act like we were 20 years younger, I discovered a type of turmeric more powerful than the powered stuff you find at the grocery store.

Read more about Liposomal Turmeric on the next page:

Discover the technology that makes PuraTHRIVE® 185 Times More Absorbable than Turmeric in its Natural Form!